From Vampire's Fall: Origins Wiki
Jump to: navigation, search
This article's content has mainly be found or created by the community. You may help us too by filling in the gaps or reporting incorrect information in the Talk:Daily Brutals section.

This article contains spoilers. Read at your own risk!

Daily Brutals are a type of Brutal. Each day, the player is tasked with finding and defeating one of them. Their rough location can be found in their menu, accessed through the second tab of the Brutal window.
While they are Brutals, their strength scales with Rebirths instead of Tiers. For example, a daily Brutal in the Normie difficulty has always 5210HP, even if the current Brutal set is the gold tier. On the other end, in Hell for instance, the daily Brutals have 83897HP (with some minor variations of +- a few hundreds) even if the bronze tier was never completed.

Each Rebirth level will see the player earn a fixed amount of gold and experience for defeating their daily Brutal.

Note: Information below should be based on 0 xp bloodlines and no extra xp gear.

Hunting and beating the daily Brutal is meant to be a sure way to increase the player's day-to-day gold and experience income. However, achieving consecutive victories yields additional rewards in the form of a streak system:

The streak count and the experience boost that comes with it are reset when a daily Brutal isn't defeated for a full day or when the streak chest is opened. 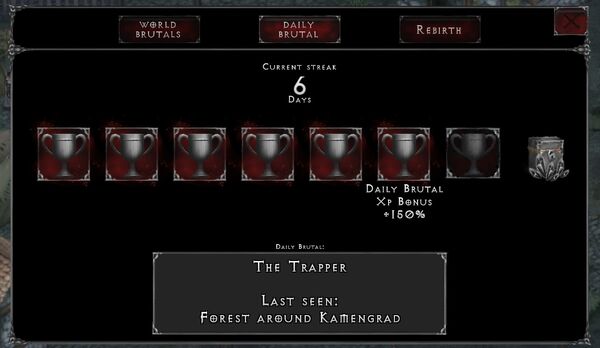 The player is on a 6-day streak and needs to find the Trapper to complete his weekly sequence.

Since the daily Brutals scale with the 6 difficulty levels of the Rebirth system, the stat table used is the Monster one. Community contributions are very welcome in this section, since the completion of this list is an ambitious goal. However, please note that there still are a lot of information gaps because the testing and recording of daily Brutals is, per nature, difficult.

Beast of the Shadows
This Daily is a beast variant.

This Daily is a type of boar, and is unsurprisingly very weak to Blunt, like most animal monsters.

The Bog Dweller is based on the Swampfolk monster group. He has at least one melee Slashing attack and one ranged Piercing attack.

Like the name suggests, this monster is a variant of the farmer enemy.

The name gives it away: it's a crawler monster.

This Daily is a type of wolf. It's found in the forest around North Kaarja

Like the God Brutal of Guard, this one is a statuesque version of the hooded humans that deals slashing and magical damage.

Insurgence Leader
This daily is of type Humanoid

This Daily is of type Humanoid.

This daily is a kind of Beast

This Troll obeys the general rules of the armored troll sub-group, especially the part where he is vulnerable to poison.

The Void Knight is a member of the sword-wielding specter type of Spirits, so expect a mix of Slashing melee attacks and Dark ranged abilities.

Daily brutals may only appear in specific locations. They work like the Wild Brutals : you will need to run in the area to make it attack you. Here is a list of known daily Brutals locations.

East of Woodland Market, near the caves where you can find Koccuburry Cave Dweller

In the forest between Angel Falls Cemetery and the bridge leading to Easthaven.

In the forest between Avan and Westwood Farm.

In Avan, chasing a blue rat
The Chat Overlord or Void Knight

In the field near Jessa where the Blue Rat quest occurs. It's in the southern part of the city of Avan.

In the swamps just east of the village of Niwokee.

The Dready Mire
Lord of Thieves

Anywhere in the Dreary Mire.

The Forest South of the Ruins of Aendisea
King of Mud

Anywhere in the Forest South of the Ruins of Aendisea.

Anywhere in the Forest around the small village of Yesildale.